Where Angels Fear To Tread 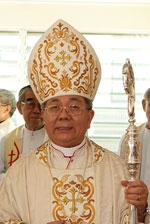 I wrote this article for the Singapore Globalist which website has since been taken down. I decided to post it here for recording purposes.

As Catholics, we have an obligation to raise our voices on behalf of those who cannot, taking action to correct injustices in our society and promote Christian values through our own actions. In thinking about the Singapore we want for our future, we ourselves must take action in working towards a society where the dignity of the human person is respected and prioritised.

Rising political consciousness in Singapore is not merely isolated to individual citizens, it also has an impact upon Christian and other religious groups who also seek and desire a greater role in the civic and political life of Singapore. Archbishop Chia’s remarks cannot be read in isolation but has to be understood within the broader context of a rising movement within Christianity about “social justice” or “social action”—essentially the idea that their faith would lead to, if not necessitate, civic or political expression.

But in the light of the recent incident between the Ministry of Home Affairs, the Archbishop, and the civic advocacy group Function 8, it is clear that more consideration must be given to what such “social action” by Christian and other religious groups actually implies, particularly in the  Singaporean context.

Therefore, it is the purpose of this  article to examine these issues; what would such involvement of religious groups in the civic or political life of Singapore mean, as well as what the implications of such an “action” would be, before issuing a gentle warning to any such group that they should, in the words of Christian Scripture,  “count the cost” before boldly venturing forth into the civic space..

The heart of the problem I believe is that this movement holds together two fundamentally contradictory beliefs. On the one hand, they maintain that their faith necessarily has “practical implications” for social or political issues. Yet they also hold that the Church or faith is fundamentally “above” politics or non-partisan, that they do not  take sides in politics or social agendas, etc.

It is clear that these two convictions are contradictory. Something cannot at the same time have “practical implications” for social or political issues and yet be “above politics”. If it has practical implications, then it must make an actual difference to determining which “politics” or “social agenda” is “entailed” or “implied” by the faith. But if the faith makes an actual difference in determining a political or social agenda, then it is not above politics but thoroughly involved in it.

This either-or simply cannot be evaded. If one’s faith truly has practical implications or makes an actual difference for civic issues, then one should be able to say, “The practical implications of the faith entails voting for the PAP” or “the faith implies that we should take a such-and-such stance on such-and-such social issues”. But this is clearly—and uncomfortably—partisan and divisive. But if one insists that one’s faith does not entail any voting choice or choosing sides in civic issues, it would imply that one’s faith makes no actual practical difference for politics or civic issues. If one’s faith is perfectly compatible with voting for any party or taking any stance on any social issue, it does not make any difference at all and therefore has no practical implications. Granted, one may say that it may be difficult to know what the political or social implications of one’s faith are, given the contingency and masses of empirical facts involved in the dirt and grime of politics or social issues, but they must admit that there is such an answer, even if it is difficult to know what it is. They simply cannot have their cake and eat it.

To be able to “raise our voices on behalf of those who cannot” involves identifying those “who cannot”, that involves partisanship, dividing and identifying those whom you are “for” and those you are raising your voices “against”. They cannot hope to keep their “hands clean” in sticking their fingers into the mud and filth of democratic politics or civil society. Granted, modern democratic politics does not involve assassinations and bribery, as did medieval ecclesiastical politics of old, but that does not make it any less of a compromising affair simply because nowadays one does not need to kill or spend financial capital. Social capital are the chips wherein the game of modern democracy is played; identifying mutual interests, compromises for a common cause, promises of endorsements in exchange for a forum to speak or give voice to one’s interest, these are the moves in the game of this “democratic process”. One cannot remain “non-partisan” and yet hope to be able to participate in the game of “democratic process” or “civil society”.

This problem is made much more acute in that in Singapore the government has an extensive and all encompassing presence in almost every aspect of society. From education to healthcare to the media to public transportation, our government has a hand in virtually everything. To comment on any social policy would inevitably say something about the government’s present policy or legislation. One cannot escape sinking into partisanship that way.

The present incident with the Ministry of Home Affairs, Function 8 and Archbishop Nicholas Chia is a glaring example in point. The Archbishop cannot hope to write a letter to Function 8 (unsolicited as I understand it) and hope not to appear partisan. In so supporting them in that letter (allegedly), he cannot escape the implication of seemingly being against the government’s on the ISA. The prelate, after closed-door discussion with the government, withdrew the letter saying that “its contents did not accurately reflect my views on the subject, and if used in a manner that I did not intend, may inadvertently harm the social harmony in Singapore.” In so saying this he cannot help but imply that it values cooperation and working with the government and preserving “social harmony” over raising his voice on behalf of those who cannot, namely the ISA detainees. The alternative implication is that the ISA is in fact not an unjust institution and is of a lower priority than “social harmony”.

The Catholic Church has always traditionally known that the world of practical politics does require unsavoury deals and compromises. In order to preserve and advance the church’s interest in the world, alliances and the endorsement of kings, rulers, emperors or whoever is in power are necessary, even with those of highly questionable character or actions or public policy. They did not flinch from getting their hands dirty in the filth of politics and of course, for the greater glory of God.

However one may not require such a cynical or Machiavellian attitude towards politics to have reservations about entangling one’s religion in the political space. Especially in the Singaporean context, we have no tradition or historic of a non-governmental civic or public space which the West had. For the West, many non-governmental civic groups like labour unions, churches, etc, had a large role to play in their civic life and therefore permitted churches and religions to engage in civic life of the country without needing to step on the government’s toes. However such a “neutral civic space” does not at all exist in Singapore, since our government has a hand in virtually everything, as I’ve already mentioned before.

It is commonly considered one of the essential features of a religion to be concerned with the “transcendent”, i.e matters which are universal and cross empirical divisions and partisanship. This “universal” character of religion  could be severely compromised in identifying one’s faith with a particular empirical partisanship or cause. Is such reconciliation between the universality of religion and its particular expression in partisanship possible? That is for each religion to work out and decide for itself. But they must do so with their eyes open, fully aware of the consequences and implications of entangling themselves with the rough realities of civic life. What they cannot do is to naively rush in where angels fear to tread, optimistically hoping that they can evade the morally complex and ethically ambiguous choices which are involved in such civic partisanship and entanglement.