What’s Wrong with Flip-Flopping? What Trump, Elizabeth I, and Han Fei have in Common 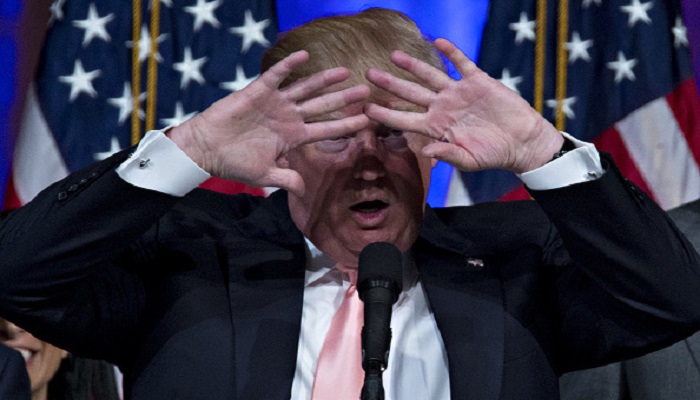 The sceptre should never be shown. For its inner nature is non-assertion… The ruler should never discuss matters of right and wrong with the ministers but let them carry on the discussion themselves… If the sovereign is not mysterious, the ministers will find opportunity to take.

When my information changes, I alter my conclusions. What do you do, sir?

-John Maynard Keynes: Reply to a criticism during the Great Depression of having changed his position on monetary policy, as quoted in “The Keynes Centenary” by Paul Samuelson, in The Economist Vol. 287 (1983), p. 19; later in The Collected Scientific Papers of Paul Samuelson, Volume 5 (1986), p. 275

The Confusing Trump: An Accident or Calculated Image?

Donald Trump has often been accused of being ambiguous, incoherent,  and sometimes outright inconsistent. His speeches and arguments on the media seem to be nothing more than a random stream of consciousness rather than a carefully constructed argument. However a recent Foreign Policy article, Donald Trump Has a Coherent, Realist Foreign Policy, has observed that such vagueness and inconsistency actually has a strategic purpose, and not it is not just about appealing to low education voters. To quote from the article:

To those who criticize his apparent contradictions, his vagueness about his ultimate strategic objectives, or his willingness to make public threats, he offers a simple and Machiavellian response: “We need unpredictability.” To Trump, an effective negotiator plays his cards close to his chest: He doesn’t let anyone know his true bottom line, and he always preserves his ability to make a credible bluff. (Here it is, from the transcript of his conversation with the New York Times: “You know, if I win, I don’t want to be in a position where I’ve said I would or I wouldn’t [use force to resolve a particular dispute].… I wouldn’t want to say. I wouldn’t want them to know what my real thinking is.”

I find this a particularly penetrating analysis of the strategic nature of Trump’s rambling incoherence and I would like to explain this idea at some depth and what it reveals about the nature of politics historically.

Democracy and the Nature of Elections

Democracy, although supposedly as old as the Greeks, is not the norm for most of human civilisation. As such the way that politics has been conducted traditionally and how it works in a democracy would be quite divergent. In order for a democracy to work, people have to trust that the candidates who run for office are who they say they are. They have to state their stances and positions clearly, they have to remain constant and faithful to them, and the people will need to believe that they will in fact stick to them, no matter the odds, if they do get elected. Especially if we’re talking about a mass democracy where most people will never have met their candidates in real life, people vote for a candidate, not because they’re personally a nice guy, but because of their official positions and stances.

It is only in such a context whereby “flip-flopping” and unclear public stances and positions would be considered a vice. How can the electorate trust that you would act upon your positions if you can change your mind tomorrow? How can the electorate know how you will actually behave in concrete situations if you’re so vague, ambiguous, and in some cases, outright contradictory, about your positions and stances?

Thus because of the time gap between someone offering himself as a political candidate and him acquiring office, it becomes necessary for a candidate to exhibit his stances clearly and to show himself constant to them that the electorate can feel safe about electing him or her.

Harmonising a Diverse Set of Interests

The problem with such an approach to politics is evident at once. A political office holder does not only govern or work with people who agrees with him, he would also have to work with and govern people who disagrees with his stances and positions. In most Western democracies it is rare that any particular set of positions or stances can command a strong majority. Even within mainstream parties there exist a diverse set of interests and opinions. Inevitably one will have to compromise on those very principles and stances one was voted on in order to get things done or laws passed.

This may seem like a good argument therefore for authoritarian forms of government where a single ruler, or a unified body of rulers, can simply act with impunity to realise their vision without all these negotiations and compromises which must necessary go on. However we tend to forget that even in officially royal or “authoritarian” systems a lot of negotiation stills happens. A king may theoretically be supreme, but in reality he needs to negotiate with others powers like aristocrats and the church in order to make things happen. Harmonising interests and coordinating the various power players within one’s realm has been a standard of statecraft for eons.

It is here where Trump’s remarks about needing “unpredictability” comes in. It is important for the ruler to not reveal his hand all at once. By keeping his true objectives or agenda close to his chest, he has maximum manoeuvrability when it comes to negotiating and working with these various interests. He can call a bluff and engage in various posturings in order to win the acquiescence and assent of other power players. If people know what your objectives are from the outset, they can hold you hostage in order for them to get what they want, but if you’re a constantly moving target, it would be a lot harder to have you trapped. As the master negotiator, Trump knows this and he is deliberately vague about what he would actually do in concrete situations or in some cases, what his actual stance is. By not committing himself to anything, by not entrenching himself in any specific position, he is free to work with anything or form alliances with anyone to get things done. After all did not St Paul himself once declared that he is willing to “become all things to all people, that by all means I might save some”? (1 Corinthians 9:22)

Han Fei was a Chinese philosopher who lived in the Warring States period before the formation of the Chinese Empire. His philosophy, Chinese Legalism, would go on to form the bedrock of the Chinese Empire. Han Fei argues that the “enlightened sovereign” should never reveal his true desires and objectives to his ministers. Han Fei spends an entire chapter discussing how wicked ministers would distort the truth and put up an appearance just to win their masters’s favour or even gain an advantage on him. Rather, the enlightened sovereign should simply rule through his set laws and procedures that none of his ministers can deceive him.

Han Fei’s argument is a sort of preemptive bluff, the enlightened sovereign foresees the bluff of his ministers and calls them out on it, simply insisting that they follow his prescribed laws and procedures since the sovereign does not reveal his true agenda or desires, they cannot manipulate him.

Queen Elizabeth I is widely acknowledged to be mostly an enigma, nobody can be really sure what she personally believes. However because of her mostly enigmatic image, she was able to successfully balance various factions and forces within her realm, and sometimes even play them off one another. She kept a delicate balance between the puritans and the high church party in the Church of England. She even played off one group of Roman Catholics against another during the “Archpriest Controversy” when Rome appointed an “archpriest” with authority over the Roman priests in England which the English priests objected to because of his association with the Jesuits. Some of these English priests went to Elizabeth to ask for her aid in expelling the Jesuits in exchange for their allegiance to her which she accepted.

We see from here that while Elizabeth I was publicly a Protestant who was supposed to resist popery at every turn, because of her fundamentally flexible nature she was able to form alliances with Roman priests as and when she needed to in order to further to cause of the stability of the realm and the ultimate undermining of Rome’s influence in England.

Trump in general shows himself to have no higher loyalty than to America itself. Although one can make probable inferences of his “true” stance from his speeches and arguments which he made years and decades before running for president, he’s still rather vague on many concrete details. He has essentially two faces, one which he presents to the media, the flamboyant and outrageous Trump, the other, his more sober and rational calculation stances which can be found on his website.

Before the media it is necessary for him to present himself as unpredictable and flexible to confuse his political opponents, and yet at the same time signal to the mass of the American people that he’s fundamentally “on their side”. Thus he rarely if never throws his supporters under the bus, even if the media goes after them, and doubles down when the media hounds him for his politically incorrect statements and stances. On the media the point is to, at the same time, demonstrate himself a leader and fighter for the American leader, in the nationalistic/tribalistic sense, and yet disguise his true agendas and to show that anything is possible with him. He therefore reveals enough of his orientation to show himself on the side of America for the people, but not enough concretely for his political opponents to pin him down.

People who live in a democracy can rightly say that it is asking a lot of us to simply trust Trump would do the right thing when he gets into office. The electorate in such a place are a lot more used to candidates stating, not only that they are for America, but also in stating what they would actually concretely do when they are in office. However given the consistency in which American politicians have often compromised upon their principles as soon as they get into office, is it any wonder that the American people are throwing their lot in with a wild card who at least shows that he isn’t afraid to stand up for American interest when it comes down to the crunch?

Perhaps all Americans can do is hope that Trump really does “Make America Great Again”.

One thought on “What’s Wrong with Flip-Flopping? What Trump, Elizabeth I, and Han Fei have in Common”