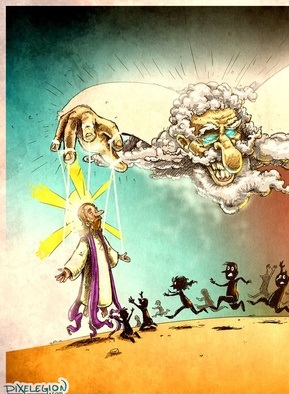 Have this mind among yourselves, which is yours in Christ Jesus, who, though he was in the form of God, did not count equality with God a thing to be grasped, but emptied himself, taking the form of a servant, being born in the likeness of men.

He left His Father’s throne above
So free, so infinite His grace—
Emptied Himself of all but love,
And bled for Adam’s helpless race

-Charles Wesley, And Can it Be that I should Gain?

There are basically two ways of explaining how Christ could be both God and man in contemporary theology. The first way is known as krypsis christology. The basic idea behind kryptic christology was aptly articulated by a verse in the Wesleyan hymn, “veiled in flesh the godhead see”. The idea is that Christ’s divinity was simply “hidden behind” his humanity. Thus Christ’s humanity was sort of like merely a cover for the Son’s divinity.

The other christological theory is known as kenotic christology. Kenosis refers to the idea that Christ “emptied himself” of some of his divine attributes when he became man.

In this post I will be giving a brief sketch of a kenotic interpretation of the incarnation and drawing out some of its implications for how we understand the nature of divinity and soteriology.

Can you be God without Divine Attributes?

Kenotic Christology begins with the biblical datum of Christ’s limitations. Christ seems not to know the hour of his return, occasionally cannot perform miracles in certain areas, suffers pain, etc. The argument goes that if we are to do justice to Christ’s humanity, it is clear that Christ really has to lack the divine attributes of omnipotence, omniscience, etc. The only thing which he retained was perfect communion with the Father, and perfect charity and righteousness after his incarnation.

Thus if we are to avoid dealing with a split personalities and two centre of consciousness (although interestingly enough technically the orthodox opinion is that Christ has two wills and therefore we can infer, quite literally two persons), we are back to the kenotic explanation and we therefore need an account of divinity without the traditional divine attributes. But what makes a person of the Trinity divine if not the traditional divine attributes?

We can simply redefine God as referring to the infinite divine life. Thus what makes Christ God is that he partakes of this divine life or substance without necessarily sharing all the divine attributes of omnipotence and omniscience. Thus as long as he remains in transcendental communion and love with the Father, he is by definition, God.

This conception therefore inverses the conceptual priority of theology proper (theology proper refers to the study of God in himself). It is usual to begin first with the divine attributes or nature inferred a priori and then figure out how the Trinity and incarnation fits into that. We on the other hand begin with the datum of the Trinity and the incarnation and then figure out how that modifies our conception of what it means to be divine. Thus on this framework divinity is not defined by the classical attributes but by a divine life and history. (To indulge in a little bit of scholastic speculation, I am reorienting our conception of the divine nature away from the Thomistic priority of divine simplicity towards the Scotus priority of divine infinity. Thus the divine nature is defined in terms of this infinite divine life whereby it’s attributes do not rigidly “stick together” but can be “spread out”, as it were, infinitistically.)

Comments on the Anglican Formularies and Impassibility

I think one argue that it is in fact compatible with the Anglican formularies bcause of a little accident of history. The 39 Articles requires subscription, not to the Chalcedonian Definition, but to the Athanasian Creed. The Chalcedonian Definition does have the phrase that the two natures are united “without change”. This phrase however does not exist in the Athanasian Creed. The 39 Articles also does not contain the term “immutable” and receives as the ecumenical creeds the Apostles’, Nicene and Athanasian.

I have however been informed that the Articles does contain the phrase “without passion” which historically has been interpreted in the Aristotelian sense by numerous Anglican commentators as “without change”. However the word “passion” could just as well historically mean “suffering” as in the “Passion of Christ”, i.e. his sufferings upon the Cross. More literally, “without passion” could simply refer to the divine attribute of impassibility rather than strict immutability per se. That impassibility doesn’t preclude suffering has been well argued by J.I. Packer in a Christianity Today article:

This conception of God [as impassible] represents no single biblical term, but was introduced into Christian theology in the second century. What was it supposed to mean? The historical answer is: Not impassivity, unconcern, and impersonal detachment in the face of the creation. Not inability or unwillingness to empathize with human pain and grief, either. It means simply that god’s experiences do not come upon him as ours come upon us. His are foreknown, willed, and chosen by himself, and are not involuntary surprises forced on him from outside, apart form his own decision, in the way that ours regularly are. This understanding was hinted at earlier, but it is spelled out here because it is so important, and so often missed. Let us be clear: A totally impassive God would be a horror, and not the God of Calvary at all. He might belong in Islam; he has no place in Christianity. If, therefore, we can learn to think of the chosenness of God’s grief and pain as the essence of his impassibility, so-called, we will do well.

Therefore we can extrapolate a like inference to argue impassibility is compatible with divine change as long as it means that this change is something willed and chosen by God himself rather than as some alien force outside of himself acting upon him by surprise or external to his will.

A kenotic christology would argue that Jesus Christ wasn’t merely a puppet of the Word of God, whose fleshly limbs jerk about in coordination with an omnicompetent mind calling the shots from behind the “veil of flesh”. When the Son of God was made flesh, he quite literally “emptied himself” to become man in all its contingent and vulnerable mortal frailness.

Kenoticists would often discuss the question as to whether or not Christ performed his miracles by simply accessing his divine power or did he pray for it to happen and then the Father answered. If Christ is to be fully human then clearly it has to be the latter, Christ lived as a human would without any extraordinary divine powers.

The only thing which Christ had which was divine is his love and perfect communion with the Father. Thus he both knew the will of the Father and his perfect love submitted to that will completely. And most of all, animated by the same love whereby he first made man, now he loves man as man.

One of the essential missions of the Son was to be an inspiration and example for our imitation and a hope for our sanctification. However the Son could not genuinely overcome difficulties and his vulnerabilities in obedience to the divine will if the human Christ was merely being jerked around by an omnicompetent divine Word behind the scenes. In order for him to be a genuine example and inspiration and hope for us, it is necessary for Christ to be armed with nothing more than love and submission to the Father’s will to show us that we too can partake of his life if we follow in his footsteps in imitating his love for man and his obedience to the Father. And his life shows us that God does look out for us as man qua man whenever we live under his will. This I believe does make a lot more sense to me than the krypsis models of the incarnation.