The Immigration Crisis and the White Man’s Burden 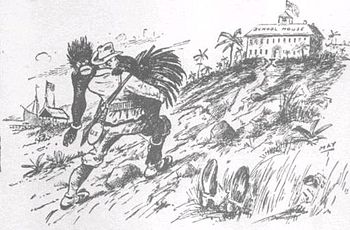 Take up the White Man’s burden–
Send forth the best ye breed–
Go bind your sons to exile
To serve your captives’ need;
To wait in heavy harness,
On fluttered folk and wild–
Your new-caught, sullen peoples,
Half-devil and half-child.

-Rudyard Kipling: The White Man’s Burden: 1899 (Fun fact: Do you know this poem could be sung to the tune of Stand Up, Stand Up for Jesus?)

Who are Responsible for Foreign Refugees or Third World Immigrants?

As far as I can see, there can only be three answers.

This therefore calls for the “White Man’s Burden” solution. If we are responsible for their entire peoples, then given how their “own” rulers are doing such a spectacularly bad job governing them as to induce such mass immigration, therefore we act on our responsibility, or white man’s burden, to re-colonise their lands and make it liveable again, so that the immigrants will not have an incentive to leave. Think of it as the “defence of the third party” criteria for a Just War.

(2) Their “own” government and/or peoples are responsible for them. Then why don’t we just send them back to their own people or country?

(3) The immigrants are responsible for their own lives and actions, including that of leaving their country. Then what business is it of ours?

The Central Issue of the Immigration/Refugee Debate: The Extent of the White Man’s Burden

The minute you postulate a responsibility for people beyond the boundaries of your nation, then, like it or not, you’ve taken on the White Man’s Burden thinking, the idea that civil authorities ultimately have some universal charge or responsibility “for humanity” beyond their own people and for everyone else in the world. This may or may not be a bad thing, depending on how efficacious your imperial project is.

But if we didn’t do anything about the desperate and suffering Syrians back in their homeland, nor have a present responsibility for them there, why are we suddenly obliged to do something now that some of them are trying to leave it?

Is the Government a Person?

Personally for myself, I don’t really think much one way or another whether or not Western governments have an obligation to accept refugees. I don’t have all the facts, I don’t know what are the logistical, integrative and practical problems which needs resolving if theye are to let in thousands of refugees in in one go. That is what the government is for, to weigh and judge the feasibility of various options based on empirical facts which most people do not have access to, to discern its consequences upon other objectives, to attempt to weigh and reconcile the various objectives together, and to make the appropriate decision.

The most the rest of us masses can do is to discuss the abstract principle at play, and at the conceptual level, there has been very little coherence in the argument. Most people treat the government as a moral agent or person which is essentially a form of anthropomorphism of the government. But as Albert Camus once puts it, to paraphrase him, the state does not have a conscience, sometimes it has a policy, that is all. The government is not an actual person, it is a system and set of institutions and agencies formed to achieve certain objectives within their given means. A government cannot be “compassionate” anymore than my oven toaster can be compassionate. It doesn’t possess a mind or conscience.The question of the objectives of the government hasn’t really been raised at any consistent or systematic level.

Conclusion: The Irony of Post-Colonialism

Perhaps the great irony of the crisis of immigration from these third world nations to the West is that after having spent most of their recent history trying to throw off the rule of their Western oppressors, they are now willing to risk life and limb out in the open sea to come once more under their rule.

Take up the White Man’s Burden,
Your duty never ceased.
Your former subjects cry out,
For your imperial leash.
You can’t forsake them ever,
For Providence has given,
this burden and your talent,
To rule o’er untaught folk.

Seriously why don’t they just ask the white man to set up government and run those third world nation? What a fantastically roundabout way of wanting to be under the white man’s thumb.