Do the Courts have the Power to Stop a Witch Doctor? The Collapse of Trust in Experts and the Charlie Gard Case 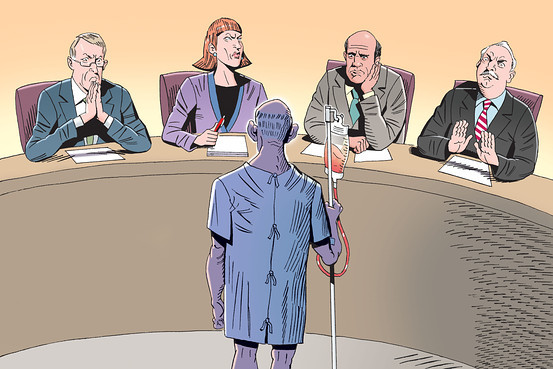 Discontinuing medical procedures that are burdensome, dangerous, extraordinary, or disproportionate to the expected outcome can be legitimate; it is the refusal of “over-zealous” treatment. Here one does not will to cause death; one’s inability to impede it is merely accepted.

-Catechism of the Catholic Church

The case of Charlie Gard, an infant with a terminal illness, is a frustrating one, because of the high emotions which are involved in the case. Too many issues are involved with it to be addressed with a single article. However I think that this issue highlights the problems which arises with the contemporary collapse of trust in “expert opinion” which may not be easy to solve. However before we can look at that issue we need to dispense with some broad political principles involved.

Do the Courts have the Power to Stop a Witch Doctor?

Suppose we have a parent whose child is suffering from some ailment. The parents are convinced that the ailment can be treated by some witch doctor or shaman. The witch doctor and shaman prescribes strange potions and medical procedures which, from a scientific medical point of view, would not cure the ailment but on the contrary inflict unnecessary suffering and have deleterious effects on the child’s health. (You can let your imagination fly as to the “procedures” the witch doctors prescribe, as gruesome and as horrific as you please.) The school notices the wounds or other noticeable signs of abuse, they call the authorities, and the child is taken away from the parent’s custody.

Let’s assume that the parents are genuinely convinced that the procedures and potions prescribed by the witch doctor will truly cure their child and let’s assume that they had nothing but their child’s best interest at heart in the scenario I outlined above. Is it right for the authorities to take the child away from the parent’s custody? I think most of us will answer yes.

Whatever we may believe about parental rights over the child, such parental rights are not infinite to the point of causing unnecessary and irrational suffering to the child. Furthermore, we think that the state has legitimate authority to judge the rationality of various “medical procedures” whether they are prescribed by shamans, witch doctors or scientific doctors, and to rule them out if they do not stand a reasonable chance of success and if in the process they inflict a disproportionate suffering unto the child compared to the chances and benefits of success. I highlighted “reasonable” because of Cromwell’s Rule that, outside of mathematical or logical truths, there is always a non-zero possibility for an event. Thus there is always a non-zero chance that the witch doctor’s procedures could work. However what we need is moral certainty, sufficient certainty for life and practice, that a procedure may or may not work, and in the case of witch doctors, there is no reasonable certainty that their procedures would work.

As such, my little hypothetical scenario takes care of two broad political principles at play:

(2) The courts do have the competence and power to determine the feasibility of any medical procedures, the reasonableness of their success, weighing their benefits against any potential suffering it may cost, and make judgements based on those facts.

A Question of Fact, Not Principle

As such, it is clear that on the level of political principle, if one accepts the arguments above, then there is no question of principle. The courts have every right to stop any medical procedure they deem unreasonable even against the parent’s own wishes and desires. The only question as such is not a question of principle but of fact. Are the chances of successes commensurate with the additional sufferings, if any, which the proposed treatment might bring about?

The Collapse of Trust in Experts

We live in tumultuous times where there is an increasing distrust of experts and the intelligentsia in general. Not only have recent major events called their competence in question, we suspect that the judgement of the intelligentsia as a whole as being biased or determined by values and ideologies diametrically opposed to ours. In this particular instance, we suspect doctors of promoting abortion, gender reassignment, the “culture of death”, etc, to be willing to surrender our judgement to them. We do not trust the judgement of such doctors to inform us of the correct procedures in this case because we suspect some bias on their part based on ideologies opposed to us.

Yet we live in a modern complex society where epistemic division of labour is necessary. We all cannot have mastery of every topic, ultimately we need to trust in epistemic authorities who know what they are doing and saying. It is well and good not to treat experts as some sort of infallible ecumenical council but neither can we dispense with them altogether and pretend that we all possess the key of knowledge.

Given this fact that trust in experts are collapsing, we feel especially existentially threatened that these people who can’t even tell the difference between male and female have power over life and death itself. Our political and social mistrust in experts cannot bear the idea of letting these people judge the fate of an infant, and before we have looked at the mountains of information and arguments, in our hearts the issue has already been decided.

Conclusion: The Fractures in the System

We live in a time when the ideological stakes are higher than ever, which ideological clashes cannot be resolved by mere technocratic fiats. Even the Pope himself decided to intervene in this case when Archbishop Vincenzo Paglia of the Pontifical Academy of Life issued a statement saying that

We do, sometimes, however, have to recognise the limitations of what can be done, while always acting humanely in the service of the sick person until the time of natural death occurs.

The main narrative of the progressives is that all ideological problems have been resolved and that there remains only technical problems requiring technical solutions. The events of last year, from Brexit to Trump, was a decisive rejection of such technocratic reduction of all political and social issues. A distrust of the technical experts is in the air whom we suspect of being beholden to less than benevolent interests and ideologies.

Yet a modern complex society simply cannot survive without its experts. There are legitimate ideological questions and principles which cannot be resolved by mere expert opinion, but yet on the other hand not everything is about principles or ideologies. Some are merely fact-sensitive issues, facts where we do need those with the expertise to determine. When ideology is completely evacuated from all social and political discourse in favour of technocratic solutions, the opposite reaction threatens to turn every issue into an ideological one.

The Charlie Gard case reveals what happens when a proper distinction between ideological and technical questions collapses. A loss of trust in experts, and the potential politicisation of every issue between the know everything technocrats versus the masses resisting their “tyranny”.

Unlike most experts however, I simply do not know what is the solution to this problem. All I have is a prayer for both Charlie Gard and a world becoming ever more unstable.

One thought on “Do the Courts have the Power to Stop a Witch Doctor? The Collapse of Trust in Experts and the Charlie Gard Case”