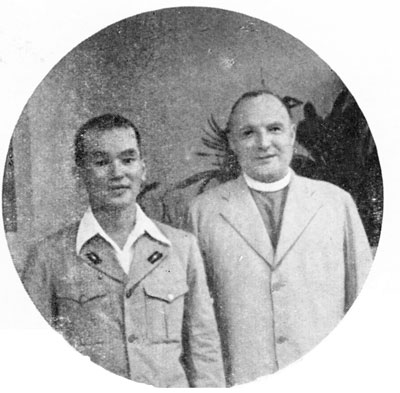 The following is taken from the St Andrew’s Cathedral Magazine, The Courier.

THE CATHEDRAL AT WAR

by sharon lim and titus zheng

2017 marks 75 years since the Fall of Singapore when the British surrendered to the Imperial Japanese Army. Although Singapore was renamed Syonan-to which means “Light of the South” in Japanese, it was a dark period of adversity, hardship and terror for the people who lived during the three and a half years of the Japanese Occupation.

Looking at St Andrew’s Cathedral, one can see many traces that the Second World War has left behind. The Coventry Cross behind the wooden pulpit is made of the nails from the ruins of the medieval Coventry Cathedral in England which was destroyed by heavy bombing when the German Luftwaffe attacked the city in November 1940. It led the Nazis to add a new word, “conventrise” into their vocabulary to signify widespread destruction.

Closer to home, there is a memorial plaque on the Cathedral’s walls which provides a listing of the names of forty men from the Malayan Civil Service who lost their lives during the Japanese Occupation as Prisoners of War (P.O.Ws) and Civil Internees.

Looking at the Lord’s Table at the East end of the Cathedral, there are two large silver candlesticks which also have a wartime connection. Following a closer peek at the inscription of the two candlesticks, one will realise that they were given to the Cathedral in memory of the men who lost their lives during the sinking of two British warships, the battleship HMS Prince of Wales and battlecruiser HMS Repulse on 10 December 1941 off Kuantan. The sinking of these two ships were a turning point in the Japanese’s military campaign as there were no longer any British warships to defend Malaya in this threatre of war.

With such stories of wartime destruction and devastation, many would be surprised that St Andrew’s Cathedral managed to stay intact as an institution during these turbulent years. The church continued to function as an “anchor” which offered a source of hope and peace amidst the rages of war.

Upon hearing news of the surrender from a Colonel at around 4pm on Sunday 15 February 1942, the Bishop of Singapore John Leonard Wilson proceeded with holding a service at the Cathedral. Despite the uncertainties that lay ahead, Bishop Wilson designed the Evensong Service for his congregation as one of praise and thanksgiving.

In Bishop Wilson’s words, this particular service was one of the “most moving and impressive services he had ever attended.” While many would assume that this would be the last service conducted at St Andrew’s Cathedral before the Japanese Occupation, the church continued worship services every Sunday from 1942 to 1945. Such preservation of order was unexpected surprise for the Church leaders during the war, who expected more opposition from the Japanese.

This can be attributed to the help of a Japanese Christian officer who shared the same name as the Cathedral, Lieutenant Andrew Tokuji Ogawa. In the accounts of Anglican Church leaders who were in Singapore during the Second World War, Lieutenant Ogawa is remembered differently from the average Japanese military officers. Instead, Ogawa was a bright spot for the Church in Singapore during the perilous war years.

Before the War, Andrew Ogawa was already known by some in the American Church lay circles as it was the Brotherhood of St Andrew which sponsored his graduate studies at the University of Pennsylvania’s Wharton School from 1929 to 1931. Founded in 1883, the Brotherhood of St Andrew is an international lay Christian religious organisation with roots in the Episcopal Church of the United States. He later became part of the Brotherhood International Council in Japan and was a member of the Nippon Sei Ko Kai, the Anglican Church of Japan.

Ogawa’s early involvement in the Church as a student may have shaped his outlook during the Second World War where he was sent to various military campaigns in Manchuria (China), Saigon (Vietnam) and later Malaya as an officer in the Japanese Army. Despite his military position, Ogawa never forgot that he was an Anglican layman. Instead of seeing the local clergy, such as the Bishop of Singapore, as “enemies”, Ogawa viewed them as fellow Christians and embarked on efforts to support the Church’s ministry upon his arrival in Singapore in 1942.

Like many other Europeans after the Fall of Singapore in 1942, Bishop Wilson was not exempt from internment at Changi Prison. Whether it was coincidence or God’s merciful intervention, Ogawa was appointed as Director of Education and Officer in Charge of Religious Affairs. Being in this position enabled Ogawa to secure the release of three Anglican clergymen during the Japanese Occupation.

The three clergymen were Bishop Wilson, Reverend Reginald Keith Sorby Adams of St Andrew’s School and Reverend John Hayter. Aware of his poor health, Archdeacon Graham White chose to remain in Changi Prison so that younger clergy like Adams and Hayter could remain free to continue their ministry.

In addition to taking personal responsibility for Bishop Wilson, Ogawa also wrote a letter in Japanese for the Bishop which provided an explanation of who he was and the nature of religious rites such as Confirmation. The Bishop was allowed under escort to visit hospitals and Prisoner of War camps, where he preached, celebrated the Eucharist and performed Confirmation Services for hundreds of Allied troops.

A staunch Anglican, Ogawa participated in church services at St Andrew’s Cathedral from the outset of the Japanese Occupation with a fellow officer. He also acted quickly to restore the church and repair its organ. An account by Reverend John Hayter describes how Ogawa made it a point to arrive in a military staff car with a blue flag to send a clear signal that Japanese officers were using the church building, so as to ensure additional protection for the Church. It was Ogawa’s persistent requests to his supervisors that resulted in an official order which clearly indicated that no church compounds were to be used for military purposes.

More than just a defender of faith, Andrew Ogawa’s actions during the war reflect his Christian character with his thoughtful and compassionate traits.

Ogawa played a role in preserving books from the library of Raffles College before the Japanese 25th Army established its Headquarters at the building. To save books from destruction during the war, he had them moved to the Museum for safekeeping.

In one unfortunate incident during the war, Ogawa even extended his kindness towards three Dutch children who were separated from their parents. The three children were left stranded in Manila after their father, the Dutch Ambassador to the Philippines, headed to Shanghai on a shopping trip just days prior to the outbreak of war in the Far East. The Japanese military administration sentenced the three Dutch children – a girl of nine and boys of seven and five – to be interred at Changi Prison in Singapore.

Stepping up to the role of a Good Samaritan, Ogawa and another officer sought to shield the children from Changi Prison. They took the children to their residence at Tanglin Road. Despite questioning from the Kempeitai (Japanese secret police), Ogawa did not bow under pressure and extended protection over the children until ht sent them on the exchange ship Asama Maru bound for East Africa.

Ogawa’s humanitarian actions did not go unnoticed under the ever-baleful eyes of the Kempeitai. Despite repeated warnings from being too “friendly” to foreigners or defeated subjects, Ogawa continued to intercede on their behalf to his Japanese superiors. One such act was securing the release of Reverend Sorby Adams, who was arrested by the Kempeitai for throwing a packet of cigarettes over a fence to Australian P.O.Ws.

Due to Ogawa’s cordial relations with the clergy in Singapore, he was eventually transferred out of his religious education portfolio and later posted to Sumatra, Indonesia on 1 May 1943. In the same year, Bishop Wilson, Reverend Adams and Reverend Hayter were interred at Changi Prison as the popularity of the Cathedral and the use of English during services were perceived by the Japanese authorities as a threat. Without Ogawa’s intervention, the Church would not have been able to enjoy 13 months of relative freedom with minimal interference from the Japanese after the Fall of Singapore in February 1942.

Following Japan’s surrender in September 1945, it became clear that the Church in Singapore owed a great debt to Andrew Ogawa, the Anglican Japanese officer. The Church in Singapore was reasonably treated by the Japanese – no church building were closed or re-appropriated for other usages unlike St John Church’s in Ipoh which became a sauce factory during the war.

When the British recovered Singapore, they noted that the Church was in better state compared to other Japanese-occupied areas in Malaya and Burma, where many churches were destroyed or severely damaged by invading Japanese forces.

As a fitting ending to a righteous man, Andrew Ogawa was successfully located in Sumatra by the British after the Japanese surrender. Ogawa was initially advised by his superiors to lie low as he was involved with the Changi Prison after the Fall of Singapore. However, the Anglican Church in Singapore did not forget what Ogawa had done for them during the Japanese Occupation.

Lord Louis Mountbatten, Supreme Allied Commander South East Asia, wrote a letter of appreciation to Andrew Ogawa, acknowledging his efforts to keep churches open for regular services during the Japanese Occupation. In September 1946, Ogawa and his wife boarded a British hospital ship in Medan for his journey home to Japan. His stopover in Singapore saw a heart-warming reunion with Anglican clergymen whom he befriended during the war years and he was presented with prayer books by members of the St Andrew’s Cathedral Congregation as an expression of gratitude to Ogawa.

Ogawa and his wife went on to have five daughters, and he eventually became a Professor at Tokyo University. He remained a faithful Christian, taking an active role in the Anglican Church of Japan and his local congregation in Tokyo. Since his departure in 1946, Ogawa made three return visits to Singapore, which included a meeting with Bishop Wilson for a B.B.C. documentary.

In retrospect, Andrew Ogawa may have passed on, but his legacy continues in standing up for his faith even in the darkest of moments. In the words of Bishop Wilson, Ogawa is an “Oriental Christian hero of the Far Eastern War” – a righteous man whose faith in God transcended enemy lines. He was a Japanese military officer, but he knew and rose up to his role as an Anglican layperson and Christian. Ogawa’s courageous humanitarian actions during the war showed how he loved and cared for his brothers and sisters in Christ. He is a true embodiment of the spirit of Romans 12:13: sharing with the Lord’s people in need and practising hospitality.

3 thought on “A Japanese Anglican Officer, Andrew Ogawa, Protection of the Anglican Church in Singapore During War World II”